Remaking a Boston Icon for a New Era

Since its launch in 1995, Boston.com has grown into one of the most highly trafficked websites of its kind. If you live in Massachusetts, it’s your first stop for the latest local news, weather & traffic alerts, or sports coverage.

News. Sports. Weather. All those topics have something in common: Immediacy. Even more than other news outlets, Boston.com is a website for right now. It’s the place everyone goes to track the latest Nor’easter and check the latest Red Sox score.

It’s more than, that, too. It’s a community. Boston.com is the water cooler that New Englanders gather around. The place everyone goes to commiserate about the snow or celebrate another World Series win. 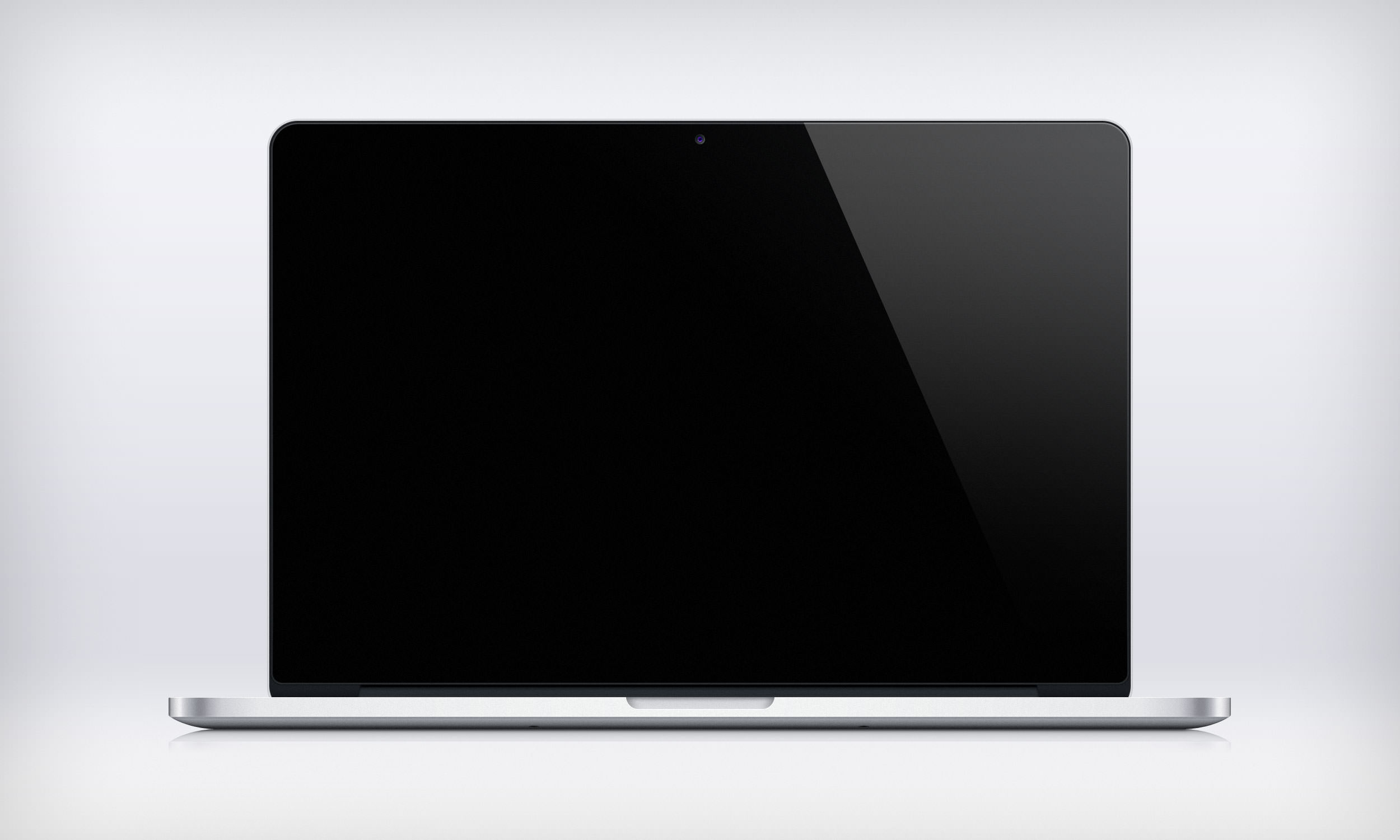 We set out to create a faster, more immediate Boston.com that reflects the community it serves. Working hand-in-hand with the team at Boston.com, we designed, built, and wrote content for a comprehensive prototype, then refined it through several rounds of user testing. The result is a new vision for Boston.com, a site that provides an up-to-the-second snapshot of the city and the people who call it home. 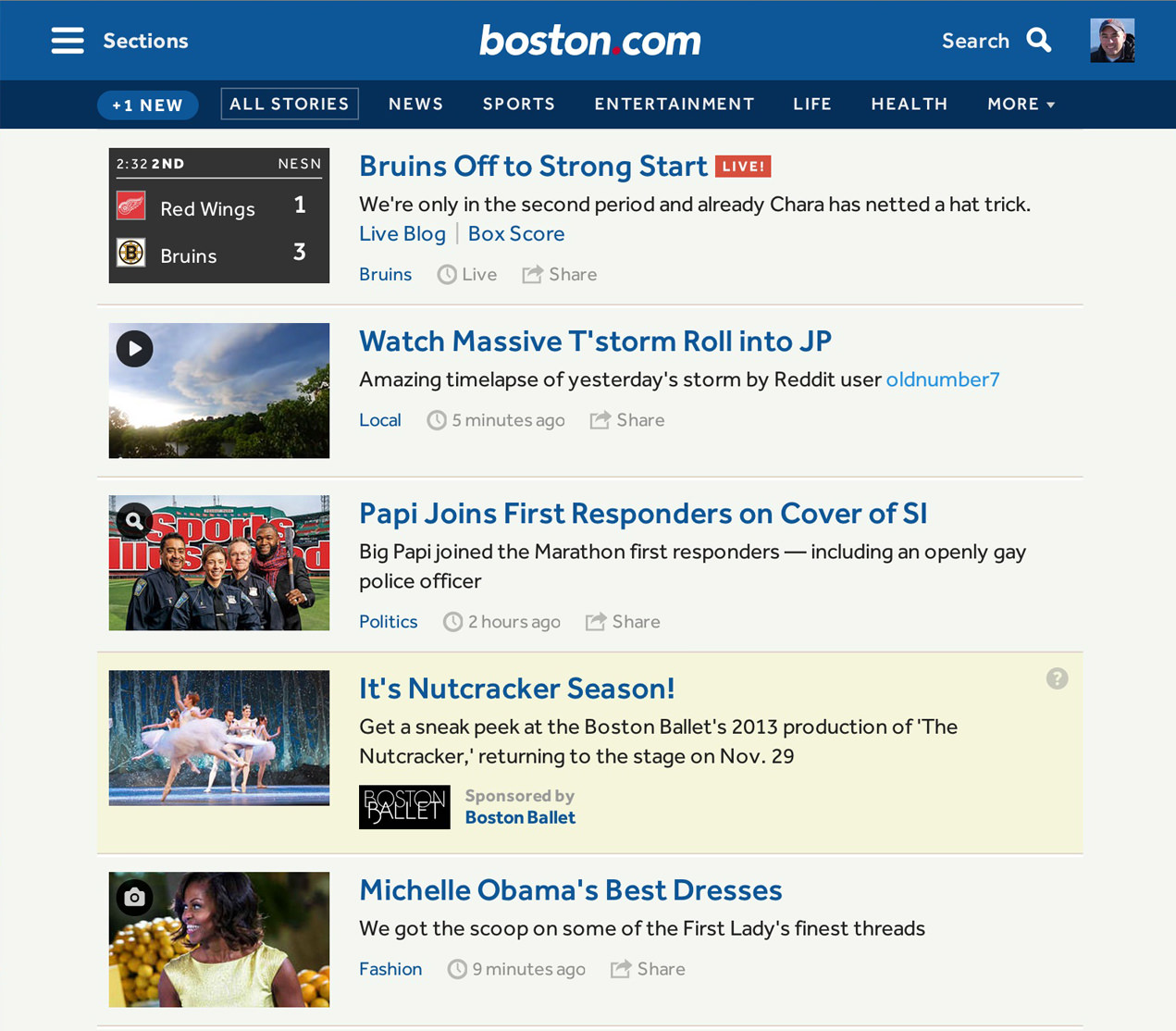 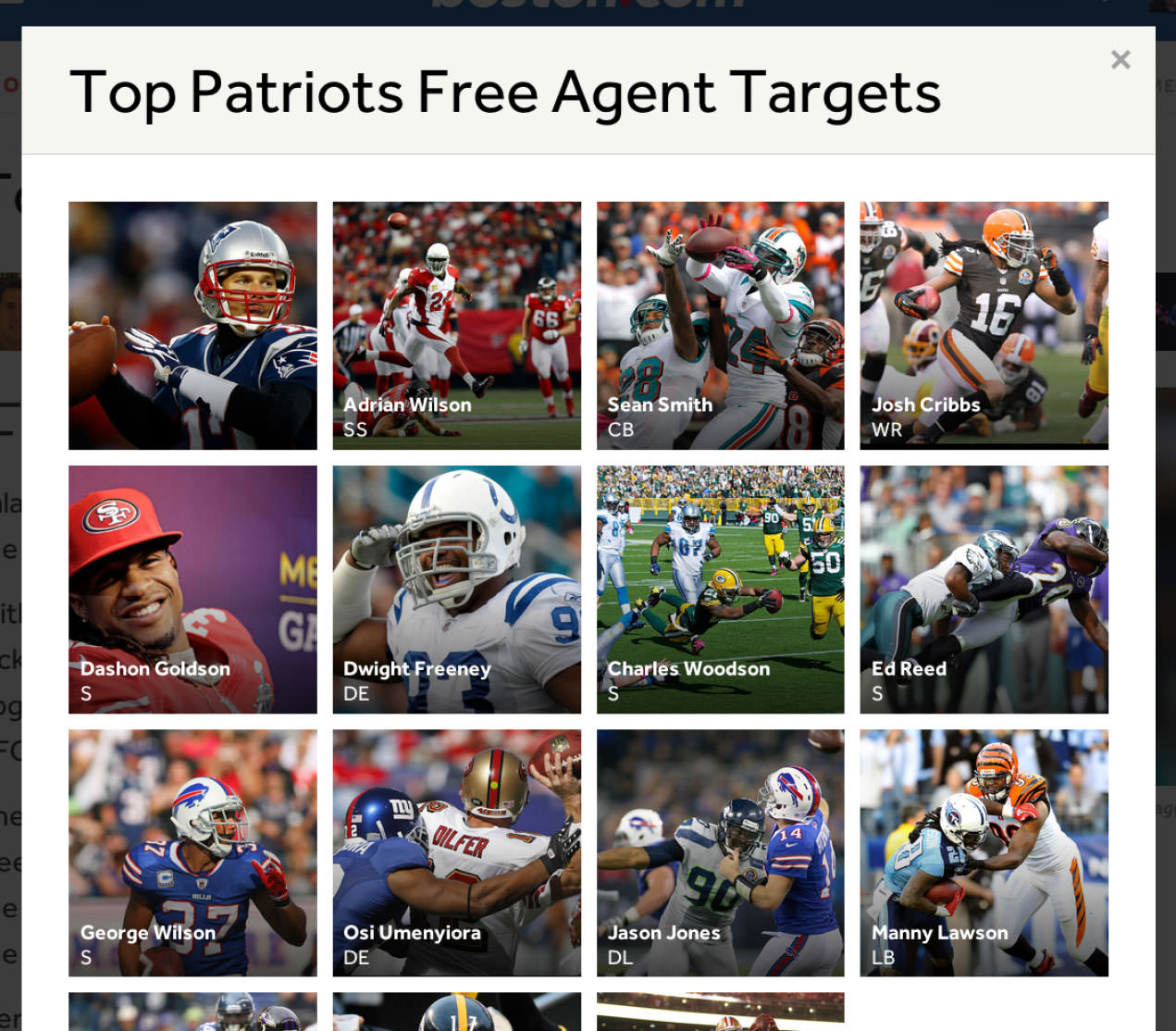 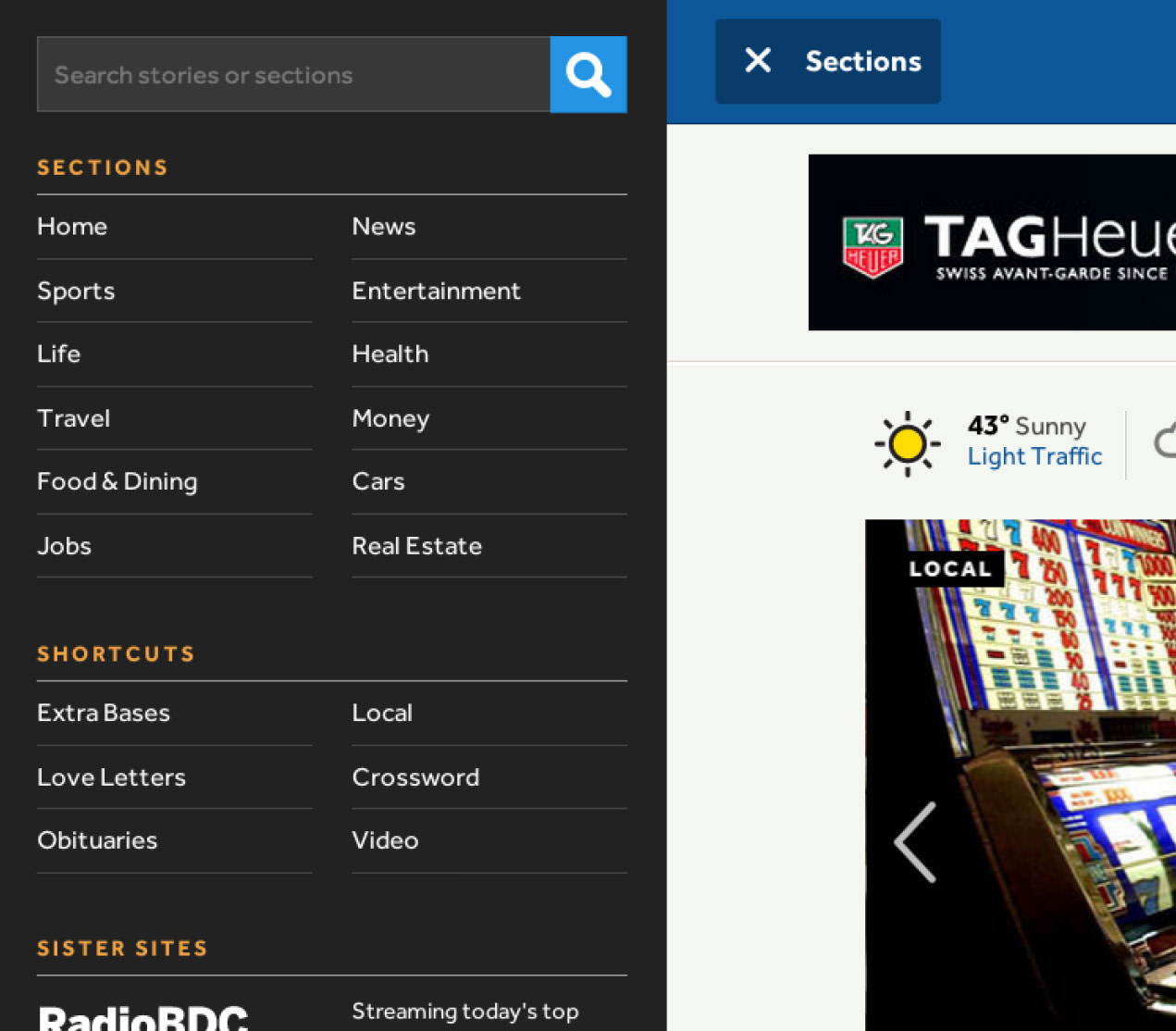 We optimized every interaction in the news stream to deliver the story as fast as possible. New stories appear as they happen. Videos play right in place. Images pop-up without a page load.

We prioritized flexibility & speed in a series of templates that look amazing whether the gallery is telling a story with text and small photos, letting gorgeous photography speak for itself, or doing both at once.

Always at your fingertips, the persistent Table of Contents links to all major sections plus the site's most popular destinations. Meanwhile, the filter nav offers instant access to top stories across a range of topics.

Early in our research, we learned that over two thirds of the Boston.com audience fall into two categories:

These users visit frequently for a snapshot of the news or a fun break from their day. They don’t want a deep read. They come to the homepage for a quick hit, go away — often without clicking a thing — and come back again an hour later. The analytics told the same story:

As the people who maintain and write for the site everyday, Boston.com producers know this well. When we interviewed them, a mantra emerged: “Be live, be fast.”

A new challenge also surfaced. The site would run without the benefit of Boston Globe content. In an effort to further distinguish the two sites, all Globe content would move exclusively to BostonGlobe.com (a site we had the pleasure of designing several years ago).

The decision to separate the content solidified how we saw the relationship between Boston.com and its sister site.

Before it could transform itself into a more nimble site, Boston.com needed to rethink how it reported the news. We helped form a strategy around telling smaller stories and amplifying the voice of the community.

The first tenet of being fast is starting small.

As the internet spurs us to create stories faster and faster, most news sites are trapped inside the traditional definition of a story. Text comes first. The words are written by a reporter. The paragraphs eventually take the shape of a complete narrative.

Meanwhile, the community is finding and telling its own stories all over the web. They come via updates on Twitter, photos on Instagram, observations on Reddit and videos on Vine and YouTube. Taken together, they can tell a news story. Or they can form the tiny, singular stories that define a day in Boston. 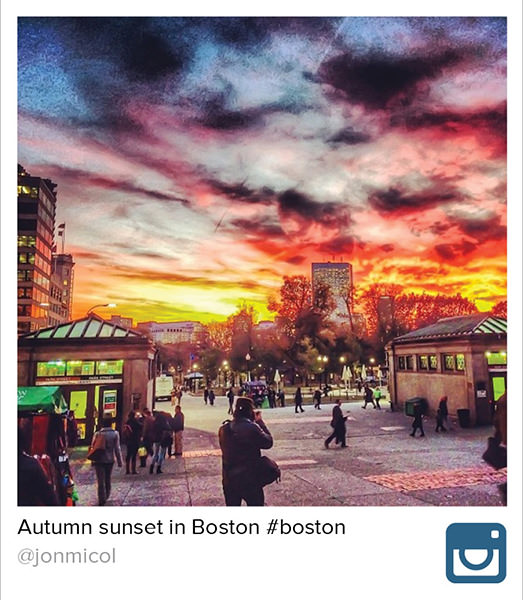 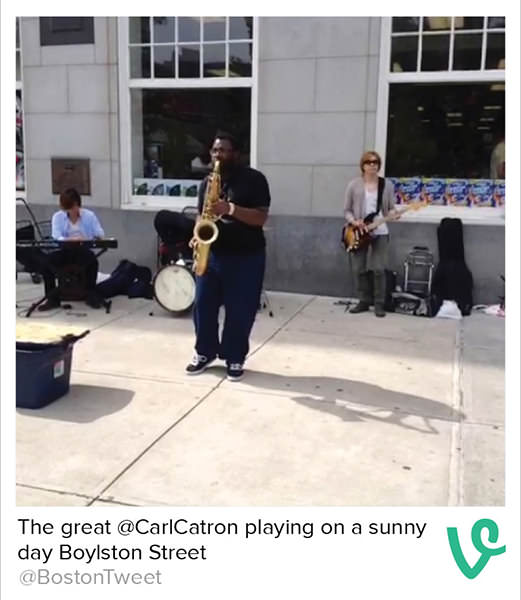 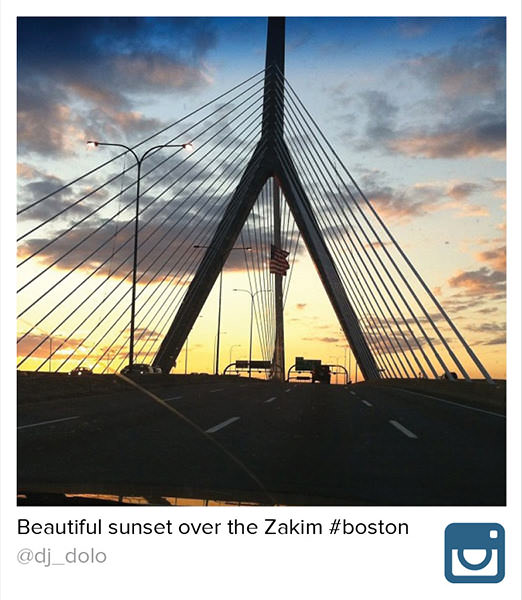 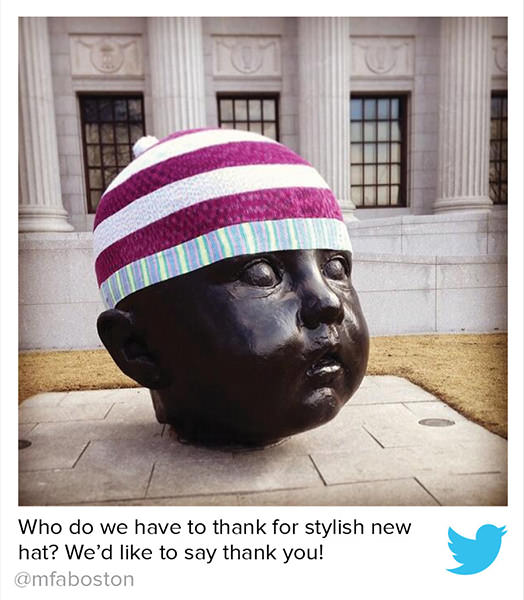 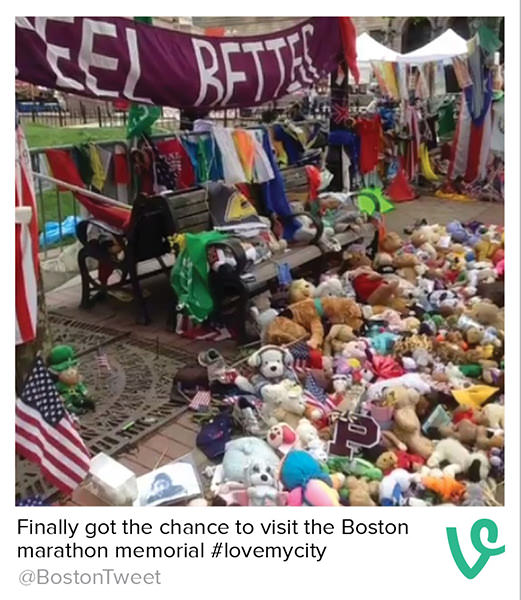 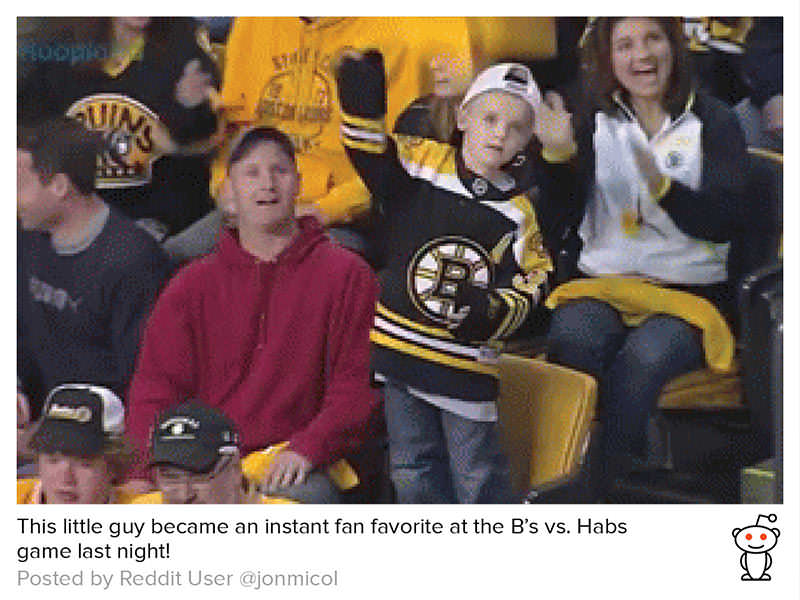 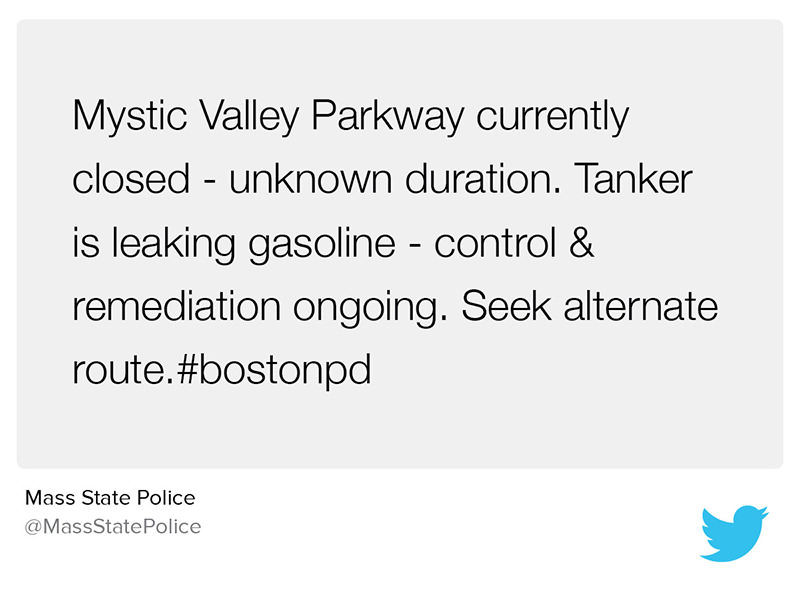 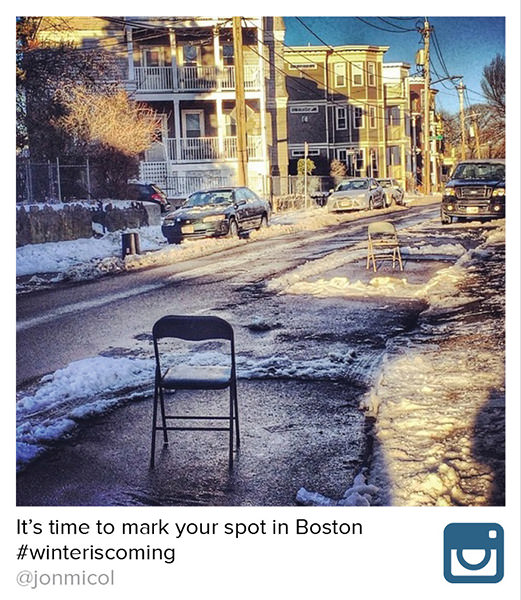 Telling faster stories meant rethinking the lifecycle of a Boston.com narrative. When a fire breaks out in Back Bay, the story often starts with something small. Someone calls the fire department. A neighbor tweets about it. An eyewitness snaps a photo.

The new Boston.com considers each of those individual elements a story in itself. The journalistic instinct is to collate all of that into a narrative. Eventually, they will (or, more likely, The Globe will). But to be fast, to be first, you need to watch the world around you and possess the tools to publish information fast.

Since many of these stories come straight from the community, it creates a virtuous loop. Regular Bostonians literally see themselves on the homepage. Their voice contributes to the larger story and to the community itself.

While that’s great in theory, someone has to find these stories and curate them. Enter the Boston.com producers. We think that David Carr’s quote perfectly captures their role on the new site:

“Great digital journalists consume and produce content at the same time, constantly publishing what they are reading and hearing.”

At key points throughout the process, we brought producers into our studio or met nearby at the Globe's office. Together, we focused on the content. Everyone talked about the best way to cover stories and communicate the site’s fun, friendly voice. We filled the prototype with real stories, tweets, and teases.

A Snapshot of Metro Boston

All of these ideas converge in the diverse stream, which publishes traditional Boston.com headlines alongside curated community stories. This ever-changing collection fits the profile of Boston.com’s most common user: The frequent visitor looking for a quick dose of local news or entertainment. The stream is the centerpiece of the new site, appearing on the homepage and beneath every single article.

The stream combines traditional headlines with a variety of new content, including interactive polls, live scoreboards, selected tweets, and calls to action for the community.

New stories appear as they happen. At any moment, the stream provides a snapshot of what’s happening in the city.

Live scoreboards stay pinned to the top while games are in progress, which means users will catch every Big Papi home run or Tom Brady touchdown.

One click is all it takes to watch a video. Since speed is paramount, videos expand to play right in place — and you won’t even lose your place in the stream.

You can do more than just click headlines in the stream. Several interactive teases (like this poll) take input directly from the user.

Boston.com is all about the community. Users can join the conversation about hot topics without leaving the homepage. 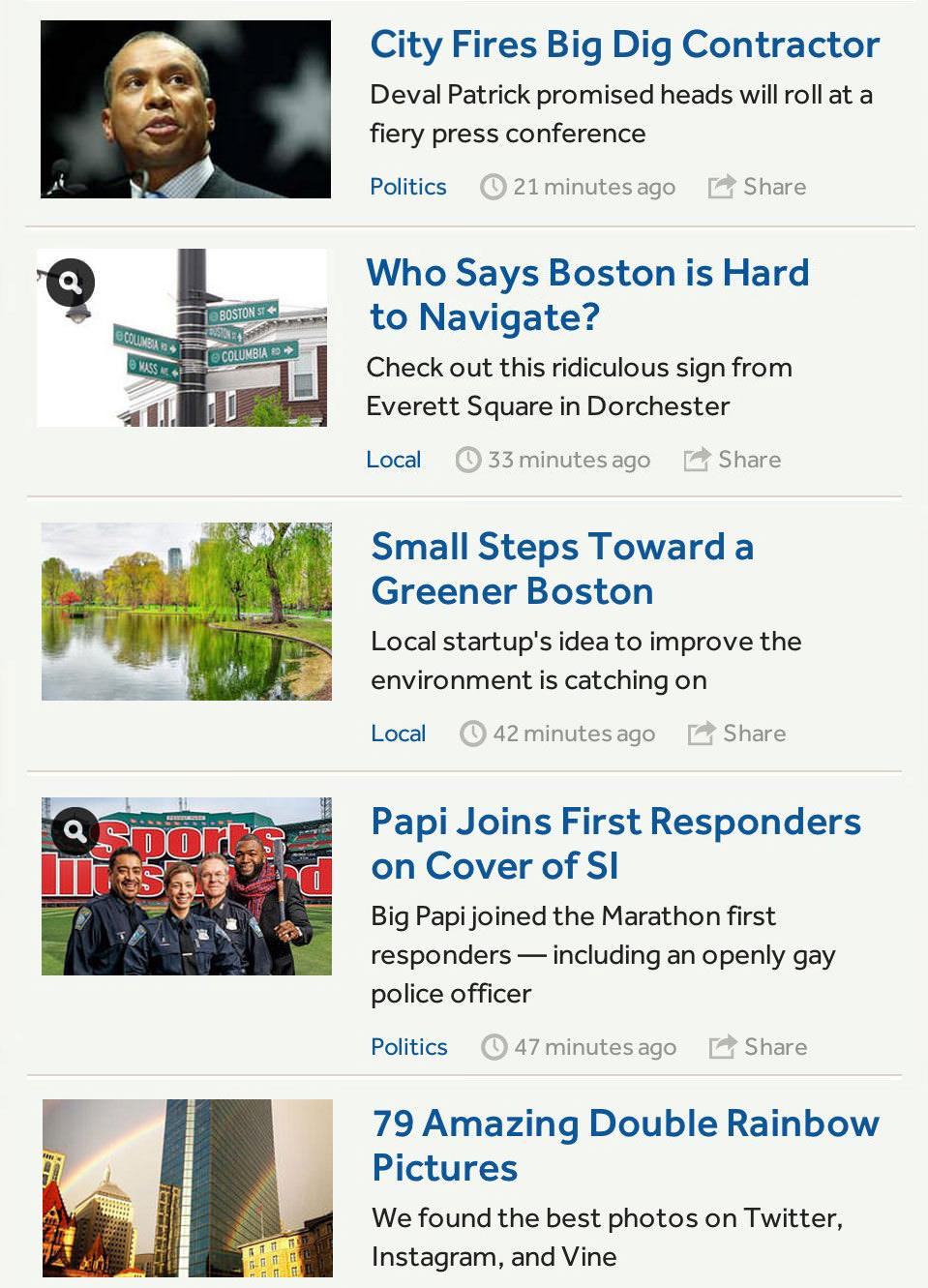 While the stream is all about capturing small moments, some events are big enough to warrant breaking the paradigm. Recently, Boston has had its share of momentous community experiences — some shocking, some tragic, some triumphant. The big news treatment echoes that emotion through bold photography and communicates the key facts through multifaceted teases. 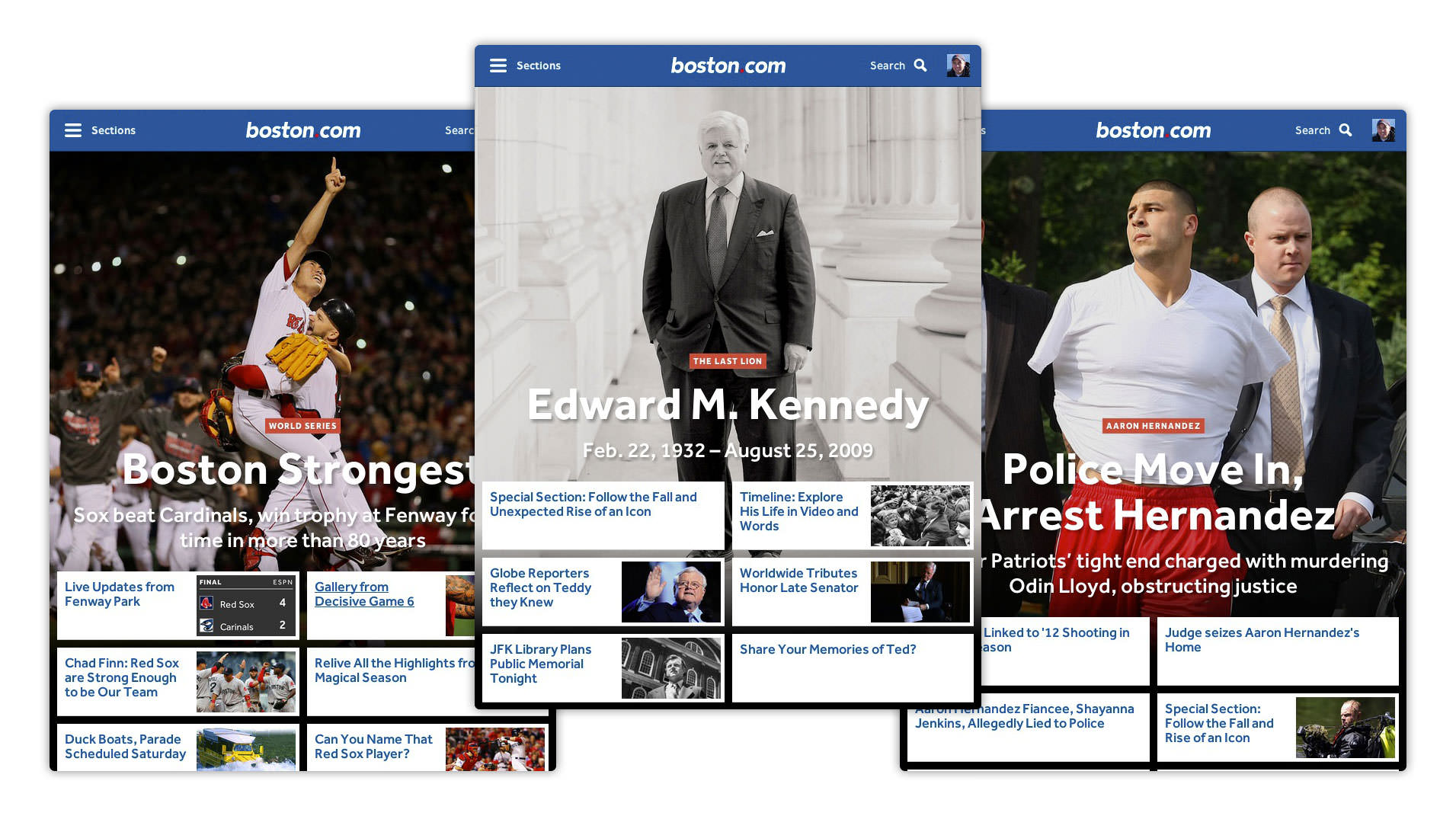 From the beginning of the redesign, everyone on the team took a phone-first approach. That’s why we think Boston.com is at its best when it’s in the the palm of your hand. It’s the perfect medium for quickly catching up on the city around you, whether you’re sitting at home watching the Sox game, riding the Red Line, or waiting in line at Pizzeria Regina.Explore Our Prototype 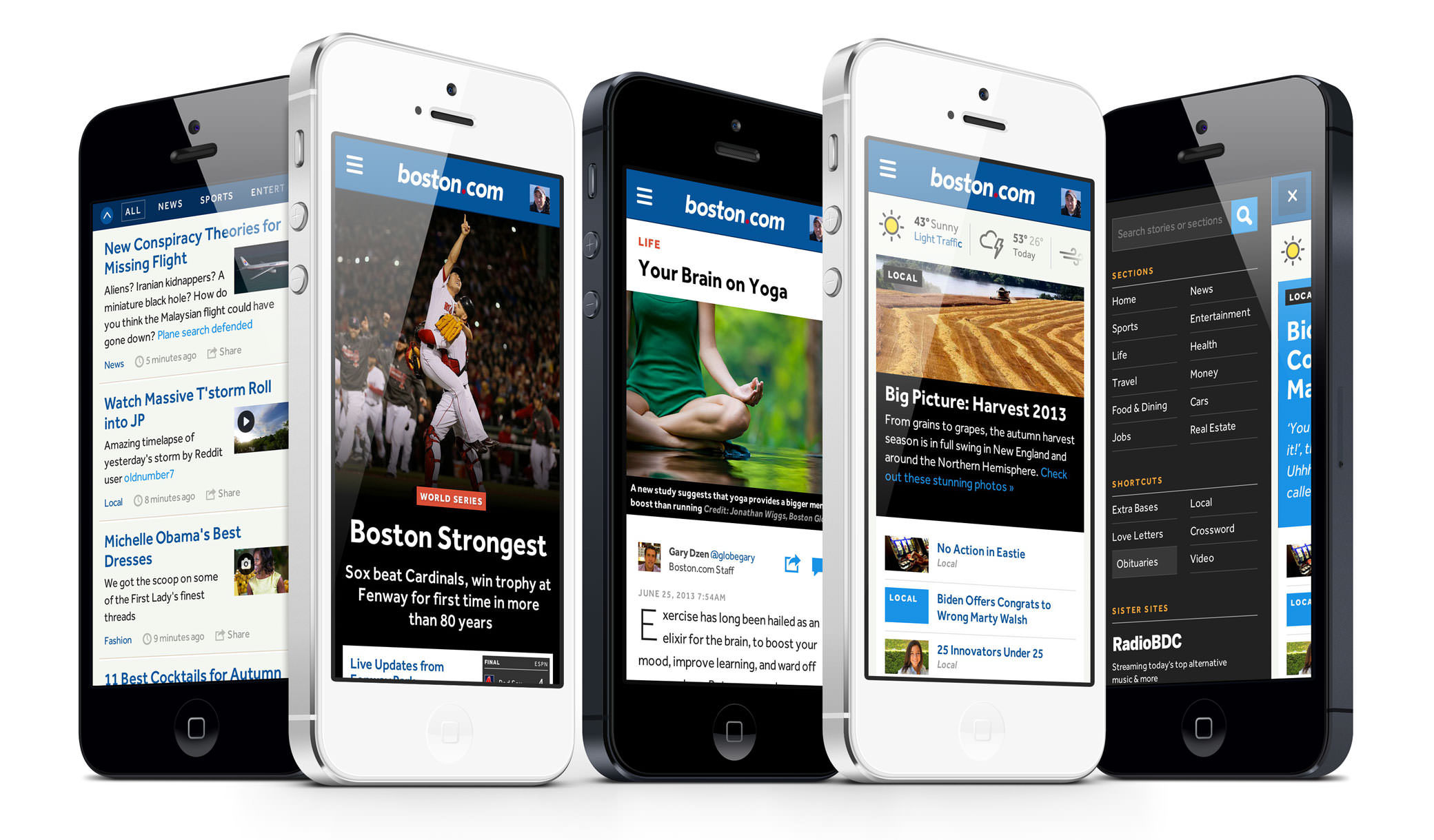